14 May A Powerful Exchange

One of my favorite parts of any presentation is when members of the audience come up t talk with me afterwards.  I purposely do not open up for questions from the audience in a school presentation due to the sensitive nature of what we discuss.  It is not uncommon for me to spend 30 minutes after my presentation talking to hurting people.  This time spent with people always moves me. 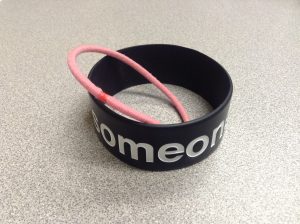 A few weeks ago, however, brought me to tears.  A young man who appeared to be 17 or 18 years old waited in line to speak with me after I did a bullying assembly at his high school.  When he began speaking, I was not ready for what he said.  He told me that about four months ago his girlfriend committed suicide.  I told him how sorry I was, and that I was certain the presentation must have been hard on him.  You see, we talk about suicide in the middle and high school bullying presentations.  He admitted to tearing up during the presentation.  But, then he reached his hand out and said, “I want you to have this”.  He placed a ponytail holder in my hand that looked like it had once been red, but it had now faded to a sad pink.  I asked if this had belonged to her.  When he told me it had, I told him I could not take it.  It was too much.  I tried to give it back, but I will never forget what happened next.  This young man squared his shoulders, looked directly at me, and said, “No.  I think I am ready to give it up now.”  I knew at that point, that the ponytail holder that he had worn as a bracelet for four months was now mine.  I told him that I could not take the bracelet without trading for it.  So, I reached in my pocket and gave him an IamSomeone bracelet.  I asked him to wear it to remind him that he is Someone of infinite worth and value and that this world would be a much sadder place if he were not a part of it.  He smiled, shook my hand, and put his new bracelet on.

Closure.  It is a powerful thing.  I can’t bring back his girlfriend, and he realized that holding onto her ponytail holder would not bring her back either.  But, in a way, she will live on.  Whenever I see that pink ponytail holder, I am reminded of what is at stake.  Our kids are hurting.  Some of our kids begin to feel like this world would be a better place without them.  I do what I do so that they won’t do what his girlfriend did.  This ponytail holder is special to me because of the closure that I saw with this young man.  But, what I wouldn’t give to hug the girl that used to wear it and give her an IamSomeone bracelet.  I can promise you one thing…I will be hugging a LOT more hurting people after my future presentations.